1. Let's say you look at something. Of the visible field, your brain is only obtaining maximal information about a small area at the center of it. This part is true - I looked it up. A lot of the research, surprisingly but reasonably, derives from studies of automobile driver error. Here's a cool picture of the field of vision of the right eye, from here:

Note the macular area. This is described as the region of sharpest vision - you could say, of highest resolution sight. It's packed with receptors.

2. The macular area basically corresponds with the visual region I'm proposing, which I'd like to call the integrated visual field. Resolution is not the defining characteristic of the integrated visual field. Rather, it is the field in which the brain best comprehends data, allowing clarity in sense of proportion and of relation of objects to one another in space. Resolution is a question of information density; visual integration is a question of information parsing.

Now, as usual, I've tested proposition 2 at Maidman Laboratories (where results are neither verifiable nor reproducible). But I started pondering the idea recently, when I drew this: 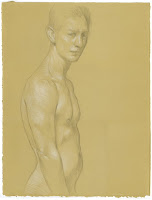 This was a preparatory sketch for a painting. What's interesting about this sketch is that the proportions are very close to photographically exact, and yet the paper is 22"x15." Ordinarily, when I draw on paper this size, I make some kind of grotesque error of proportion, basing my work as I do on the shape procedure. Here's a recent drawing of Leah on paper of this size: 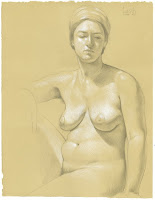 This drawing has some things to recommend it, but it has so many problems of strict representation that it's really more problem than representation. Her head is too small. Her left arm (our right) is too thick. She appears to be missing the upper part of her ribcage. There is very little left to do with this drawing except to pursue the Matisse path of heightening the problems and making something expressive out of them:

Henri Matisse, Large Reclining Nude/The Pink Nude, 1935
Oil on canvas, 26" x 36.5", The Baltimore Museum of Art
There was a difference in circumstance between my drawings 1 and 2. I was sitting when I did drawing 2 - the Leah drawing - with the paper taped to a board on my lap. To get the perspective I needed for drawing 1, I had to stand, and I put the paper on a table a little below waist level. I was at least a foot farther from the paper for drawing 1 than for drawing 2.

That is very interesting.

I have no trouble drawing small faces and small figures with the paper on a board in my lap. Here's a 10-minute sketch, maybe five inches tall: 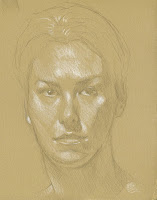 The restricted size of the images means that they were inside my integrated visual field.

Now, if this concept is something like true, then it explains a lot of other phenomena in the arts. Here are a few:

1. Painters step back from their canvases. There are a lot of reasons to do this - to see how the brushstrokes look at the expected viewing distance, how the colors and values are working together. But I would contend that a major reason is to move the entire canvas into the integrated visual field. It's the only way to tell whether the figures make the sense intended - whether you're a proportionist like David or an expressionist like Matisse.

2. The sight-size method. This is a method at which I have always sniffed, being a snob and an ignorant one at that, which involves placing the paper or canvas on an easel at such a distance from the eye that the image can be made to appear exactly the same size as the subject: 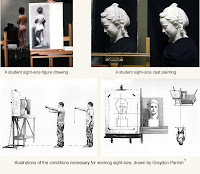 Graphic source: http://www.atelierstockholm.se/index.asp?id=64&parentid=64&=1
It is associated with obsessive and quasi-mechanical measurement. There is no disputing, however, that it allows students to make extraordinarily accurate representations.

My suspicion is this - while the explicit methodology of the sight-size method involves finicky placement of subject and easel, and endless measurements, people aren't really computer programs and cannot resist some degree of natural visual processing. So the implicit power of the sight-size method is that it forces the entire drawing/painting surface into the integrated visual field of the artist. Therefore, much of the proclaimed benefit of the sight-size method, which is making largish pictures accurately, can be obtained, although more slowly, by just moving the drawing surface away from your eye.

3. The importance of analytic learning of proportions. This has been a big deal for, like, ever: 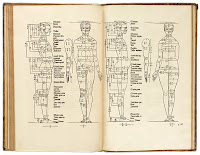 Albrecht Dürer (1471–1528)
from Four Books on Human Proportion
Why do artists do this? Well, not because it's so fucking interesting, let me tell you. The stated reason is a good reason - so good that it is sufficient: to understand, in an abstract and intellectual way, the very real complexities confronted by the artist when studying any given individual.

As you know, I spent a few years taking gross anatomy. And if there is one thing I learned from hacking up cadavers, it is that there is no overstating the value of attacking the specific with a strong understanding of the general. To know the general only is to know nothing, but to know the specific only is to understand nothing. Both are absolutely necessary and reinforce one another.

So the given reason for studying proportion explains its study. But let me slip a second reason in. The utility is not only in the artist-subject relation. It also resides in the artist-art relation. Which is to say, it lets the artist standing close to the canvas mimic the effects of the canvas appearing entirely inside the integrated visual field. If I can analytically say, "This part needs to be 3/5 the length of that part," I don't have to step back and make it intuitively so. I just have to measure it out properly and keep going, and the problem will take care of itself.

Careful comparison of this premise with my drawing of Leah above will reveal that I have not made any study of the rules of proportion whatsoever.

4. Hockney's problem. In his book Secret Knowledge, David Hockney proposes that artists have secretly been using the camera obscura and related optical techniques for centuries to produce accurate draughtsmanship. It's a fascinating and passionate book. Sadly, it relies on a weak and self-serving sense of historiography as, in fact, most conspiracy theories do. One of the more intriguing bits of internal evidence which Hockney cites is the tendency, in some paintings, to show slight shifts in perspective in different regions of the painting. He argues that these shifts reflect the small visual field resolvable by lens-based drawing techniques, requiring repeated shifts in lens placement, and thus perspective, to build up as a mosaic the overall visual field of the painting.

Well, Monsieur Hockney, perhaps you are right, but are looking at the wrong optical tool. The effect is only perceptible in paintings with high specificity of realistic detail. To paint that kind of detail, you have to get right up close to the canvas. And if you don't produce an analytic underdrawing using lines of perspective, then you're going to rely on a mosaic of regions of focus as you work your way over the surface of the painting, over multiple painting sessions. Any such mosaic, as my Leah drawing illustrates, will involve both perspective shifts and odd proportion issues at the boundaries between regions of stable visual integration (in my case: where the head-shoulder region meets the torso, where the length of the left arm - longer than my integrated visual field - is integrated with the width of the left arm, which lies within it, etc.).

I'm not claiming that I'm right and Hockney's wrong. I'm suggesting that Hockney's explanation is not the only available explanation, and that one consequence of the integrated visual field is an explanation of the phenomenon he cites without need for reference to external lens apparatus.

So there are a few examples for you. Let me sum up the principle by extending it: if this business about an integrated visual field is correct, then there is only one natural drawing size. The fact that drawings are different sizes occurs by two means: the variation of distance between the eye and the drawing surface, and technologies for artificial alteration of the drawing size, such as the grid, the study of proportion, and so on.

This is not to say that unnatural drawing sizes do not exist in art. Consider Stephen Wright at his most flamboyant:

If I'm correctly guessing what paper Steve's using here, this drawing is 90 inches tall. It is certainly not less than 45 inches tall. Steve is willfully putting himself closer to the model than his integrated visual field can handle, shattering the model into a series of regions of contradictory scale and spherical perspective. He's also willfully making the drawing bigger than his integrated visual field can handle, forcing his sense of proportion to slink off by itself and cry in a corner. The integration provided by the integrated visual field is the organic basis for our ability to freehand a drawing in mathematically correct perspective and anatomically faithful unity. Neither of these things interests Steve, so he devises methods to outwit his brain. He scales his draughtsmanship far outside his retinas' surface areas of integration, blasting apart euclidian space to evoke a subjective space approximated by the failure of the mind to unify the visual field.