Can we talk for a minute about the representation of space in painting?

Actually, before I begin, let me admit that, as usual, I come to this topic armored with my obsidian ignorance, so please take any claims I make, or conclusions I reach, with a large tablespoonful of salt.

Anyway - the mainstream Chinese, Japanese, and Western traditions of space representation are all approximations of space as a coherent three-dimensional physical phenomenon: 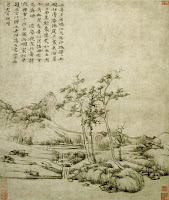 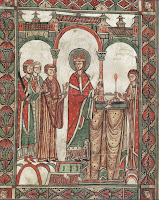 medieval European painting - sorry I don't have better information, I just really like this picture
The Chinese and Japanese system of aerial perspective was developed as an expressive end in itself. The Western aerial tradition struggled toward mathematical perspective, which, as we all know, they finally cracked during the Renaissance: 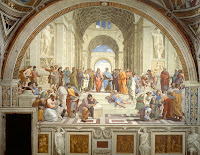 Raphael, School of Athens, 1510-11
The assumption has always been that the goal is a faithful depiction of the actual euclidian geometry of space in the Earth environment, and modern Western pictorial methods have both achieved this goal, and explored its available variations in creative and fascinating ways - 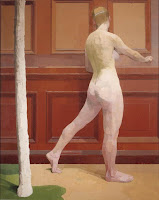 Euan Uglow, Girl Tree, 1989-91
Euan Uglow attempted a non-geometric rendering of shallow spaces based on an intuitive concept of pure optics which he nonetheless expressed in a mathematically precise manner.

Francis Bacon, Pope II, 1951
Francis Bacon became fascinated by the idea of space-as-concept, rendering spaces in wireframe in order to lay bare the intellectual content of our acculturated concept of three-dimensional space. He imposes the grid on an amorphous void, expressing his concept that order is a weak imposition of the mind on a chaotic and hostile universe. We see the same wireframe premise taken up, from a much more optimistic point of view, in Hockney: 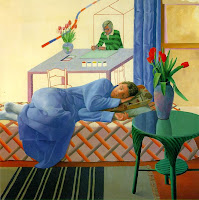 David Hockney, Model With Unfinished Self-Portrait, 1977
Hockney later rebels against coherent three-dimensional space, but his shifting-perspective photographic collages are a reaction to Western space, and therefore represent a part of the paradigm, not an independent creation:

David Hockney, Kasmin, Los Angeles, 28th March, 1982, you guess the date
Hockney's photographs descend from the body of thought called Analytic Cubism, a corpus so complex and so peripheral to my theme that we will conspicuously fail to consider it here.

Escher generates imagery as a means of expressing mathematical concepts of space, and takes advantage of very sophisticated representations of space, such as the use of sinusoidal curves rather than straight lines to mimic the mapping of perspective over the field of a shifting glance:

M. C. Escher, Treppenhaus I, 1951
Be all that as it may, a single assumption underlies all of this work - that space in the image should reflect physical space in the scene depicted.

This is not the only way to represent space in an image. 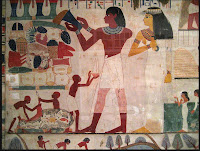 This is from the Metropolitan Museum's set of reproductions of New Kingdom paintings. Several familiar features are visible in this image:

1. The mingling of text and figure.
2. The representation of rows of figures in a manner similar to a writing system.
3. The depiction of figures at a variety of scales.

The third statement interests me particularly. It could be argued that the bottom row of figures, separated by a line from the main scene, occupies a separate space and that the reduced scale is thus motivated by a difference in the space depicted.

But the small figure on the left offering an object to the large male central figure clearly occupies a single space with the main figure. So what does the inconsistency in size tell us? That the little figure is less important than the big figure.

Combine this with the arrangement of figures in rows, like letters, and what kind of space are we looking at? Not a physical space, but a narrative space: 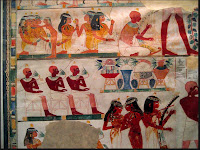 Egyptian pictorial space is a space determined not by physical reality, but by narration of events. Figures are grouped to depict processes, and the relative importance of objects and participants is indicated by scale. It is a powerful and strange space, using physicality not as an end in itself, but rather as a bare-bones means of expressing intellection.

Persian illustration from manuscript of the Shahnameh
But the pure narrative space, totally divorced from physical context or consistency, is the realm of Egypt.

I have occasionally considered the applicability of this mode of spatial representation to my own work. In doing so, I have reflected on other modern-age artists who, intuitively or not, have worked in the realm of Egyptian space. The key example, when you think about it, is Keith Haring: 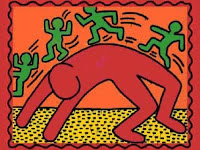 One of four bazillion Keith Haring pictures
Haring's work has the character not of a fully-formed image space, but of a semiotic map. 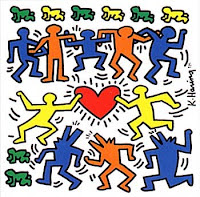 Another one
This mode is expressed, in looser form, in Basquiat's quasi-linguistic work as well: 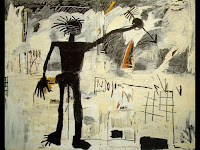 Jean-Michel Basquiat, Self-Portrait, 1982
The linguistic thread is taken up again in the peyote-trip sequence in Beavis and Butthead Do America, which to me includes one of the most astounding bits of cinematic grammar of the past twenty years - the abrupt conversion of the picture frame from a perspectival "window" into a flat linguistic sheet:

Mike Judge, Beavis and Butthead Do America, 1996
For moving closer to a physically representational paradigm, while maintaining radical distortions based on intellectual emphasis, we have Matisse: 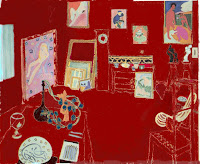 Henri Matisse, The Red Studio, 1911
And Van Gogh, particularly in his room at Arles: 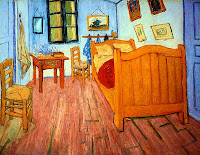 Vincent Van Gogh, Room at Arles, 1888
But there is a limit to the possibility of the hybridization, as demonstrated by yet another accidentally bizarre Ingres painting: 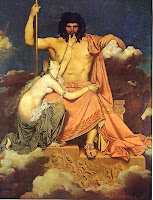 Ingres, Jupiter and Thetis, 1811
In this painting, Ingres uses the concept (there's a cool word for it, which I forget) of representing the Big God as physically bigger than whoever else is in the room. At the same time, he uses his typically idealized high-gloss rendering of physical reality. To me, this combination doesn't really cohere into an organically unified work. The conceptual fracture makes it fascinating, but it doesn't yield a synthesis.

Why not? Let's go back to Egypt: 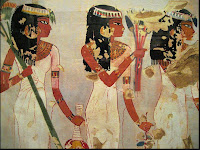 Consider the figures - perhaps the most famous aspect of Egyptian art. They are stylized, simplified, always seen from certain characteristic perspectives (profile head, frontal torso, profile legs), and repetitive. I would contend that for a picture to work, its degree of participation in narrative space must be accompanied by a parallel degree of divorce of represented objects from physical realism. Physical realism has its home in physically realistic space. In fact, one evokes the other - a law which Ingres tries, and fails, to break. To demonstrate the evocation, even when the element of space goes undepicted, consider the figures in the Elgin marbles. They are relatively naturalistic, and if you ask, "Where are they?" you will picture a physical space:

So if I want to use Egyptian space, I have to come up with a mode of representing the figure which is consistent with the demands of the space. I actually did this accidentally in a few early life drawings:

Thirteen Pictures of Kem, 1/11/2002,
pencil and gouache on brown paper that proved sadly oil-stained
when I dredged it up from the deep archives, i.e. a plastic tub under the bed
These figures occupy a single scroll-like space, not only because of their arrangement on the paper, but because of their simplification into stylized forms.

Thanks for taking the time to consider these ideas with me.
Posted by Daniel at 10:25 AM